Our little Daylily garden on our 20 acres of heavily wooded forest borders the State Park here in Northeast Florida. Away from all the city lights, it gets really dark at night. Sometimes late at night if I go outside I can hear strange sounds coming from the dense woods just beyond the range of my flashlight. Sounds that I never hear in the daylight. I don’t know what kind of creature makes these sounds but my young daughter won’t venture far beyond the back door after dark. Of course the park has a five foot wire fence along it’s perimeter as I have seen on a nice sunny day while venturing through the woods to check out the back of our property line. I noticed that the wire fence was pulled down in places as if something large and heavy had tried to climb over it. I meant to mention that to the Park Ranger. I also noticed several paths traversing through our property. Something has been through here and it looks like its been often. Recently I have been puzzled about the condition of some of our daylilies. A number of them are missing some of their healthy green foliage, like they were hit by a weed eater or string trimmer. I wasn’t too worried about it because they will grow back. What kind of creatures do you think could be wandering through our yard when no one was watching? Knocking over flower pots and munching on fresh green leaves and flower buds too. A few pictures will tell many words. Yep! You’re right. You guessed it. DEER. More than one too. Three to five young females along with their mother stumbled onto our Daylily garden and they were not about to leave. We took a few pictures, enjoyed their visit before our presence frightened them away. I know they will be back when no one is watching, early one morning. We tried to discourage them from eating our lovely daylilies by spraying some Deer repellant around. But it stinks so bad that even I don’t want to be in the garden. Don’t know if it works yet. What if they like it? Then what? chomp chomp 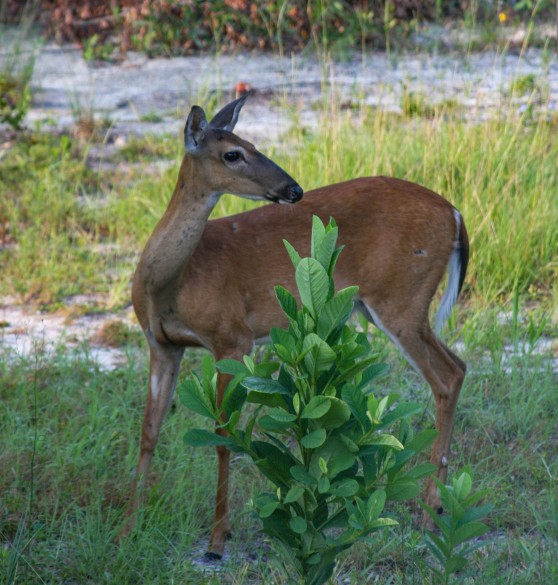 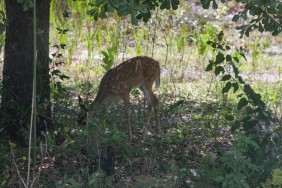 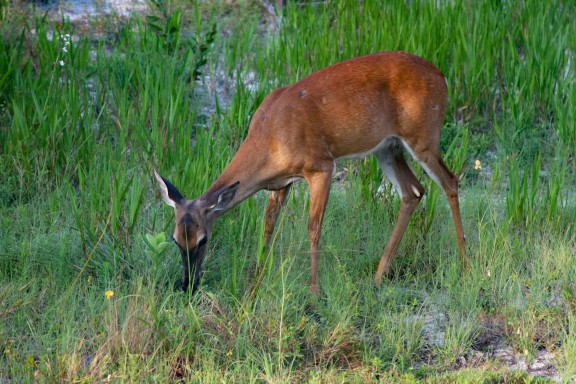 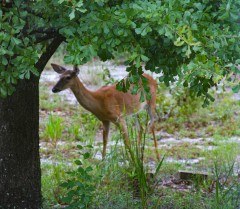 You came to this site because you are interested in or just plain curious about those lovely flowers you know of as daylilies or Hemerocallis. You are used to seeing the plain yellow or orange daylilies used in a lot of commercial landscaping because they are easy to maintain and care for. Pretty but a little boring. After all, plain yellow or orange? A few years ago my wife Theresa and I were at the Shopping Mall when we stumbled on the local Daylily Club Annual Show and plant Sale. The colors! All of these lovely blooms lined up for judging. Pinks, blues and purples in just about any combination you can think of. Great big 6″ and 7″ blooms. Little bitty ones about 2 1/2″. The combinations were fascinating. We couldn’t leave without a few of these plants. We just couldn’t. We picked out a few plants and took them home. The next spring we had blooms. Went to the show and plant sale for the second year and bought a few more. Every year we added to our collection and now have nearly 200 plants of all colors shapes and sizes. Talk about addiction!! Every Spring and early Summer we are greeted each morning with new smiling faces of gorgeous color. Our daughter, Niki, is a lot of help and is as deeply involved as we are. We set up this site not to sell daylilies but to stir your interest in daylilies. We will tell you of some of the problems we have had and some of the solutions we found. Maybe we can give you a head start and a higher success rate from the very beginning. Enjoy and good luck. Charles and Theresa

This Site under construction